Networking Terminology refers to the things that used to communicate like Nodes, Media, Server, Host, and Workstation. let's take a brief look at each of them. 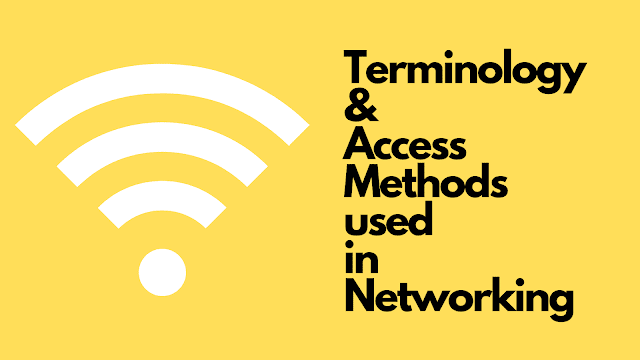 The PCs and the server are known as network devices or network nodes. In general, a device or node is connected directly to the network cable or data path.

The media and data bus are collectively used to refer to the data path. Media can be
Most LANs use bounded media, although there is current interest in developing unbounded radio broadcast LANs.

The term server refers to any device that offers a service to network users. a server can be hardware, software, or both. The server can be PCs doing double duty, or they can be special-purpose devices. The most common ones are file servers, print servers, and gateways (also known as communications servers).

The term host refers to the microcomputer attached to a network device. It may also refer to the native operating system on a workstation. Thus Windows XP is a host operating system, and an IBM PC or PS/2 may be host to a server.

A workstation is a computer used as a node on a network primarily used to run application programs. in the IBM Token-Ring Network, any IBM PC-compatible computer can be used as a workstation.

There are three ways to access the Internet:
A major consideration in deciding which type of access to choose used to be how many hours you expect to be online each month until last year subscriptions were typically based on the number of online hours. you can purchase plans that include from five to twenty hours per month, with an additional fee for each hour over.
Many of the services also offer unlimited use plans and include a discount if you pay for a year in advance. Because of the intense competition for subscribers, pricing plans rarely remain constant in today's market. it is important to examine the pricing structure of the commercial online services and then compare them to a couple of ISPs before making a decision about which to choose. other questions you should consider in selecting a provider are:

Special Consideration for the Blinds

With the help of the Internet, like a telephone, you can use your PC to talk, chat and send messages to anyone owning a PC or any other type of computer that is connected to the Internet. The Internet provides special services for blind people to express their views with others all over the world.
With the Speech, Recognition Technique blinds can use the Internet and send their messages in voice to any other system which have multimedia facilities and a connection to the Internet. Dragon natural speaking software is one such software that converts speech into text.
Add Comment
Networking
Monday, March 22, 2021