The Transmission Control Protocol (TCP) or Internet Protocol is an industry-standard protocol suite for wide area networks (WANs) developed in the 1970s and 1980s by the U.S. Department of Defense (DoD). TCP/IP is a routable protocol that is suitable for connecting dissimilar systems (such as Microsoft Windows and UNIX) in heterogeneous networks.
It is the protocol of the worldwide network known as the Internet. the Internet began as a project funded by the United States Department of Defence in the 1970s in interconnect educational institutions and government installations. At that tie it was called ARPAnet (Advanced Research Projects Agency Network). over time it has evolved into the huge worldwide network known as the Internet.
The tools that make up the Internet protocol suite, the best-known being TCP (Transmission control protocol) and IP (Internet Protocol), have become de-facto standards because of the success of the Internet. the entire protocol suite is referred to as TCP/IP.
The Internet protocol suite is unique in that it is made up of non-proprietary protocols. this means that they do not belong to any one company and that the technology is available to anyone who wishes to use it. as a result, the internet protocol suite is supported by the widest variety of network vendors.
The Internet suite was developed about ten years before the OSI model was defined and can therefore be only roughly mapped to it. the internet protocol suite was defined according to its own model, known as the Internet or DOD model. 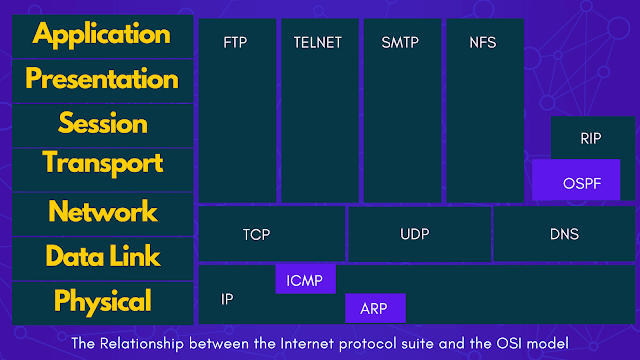 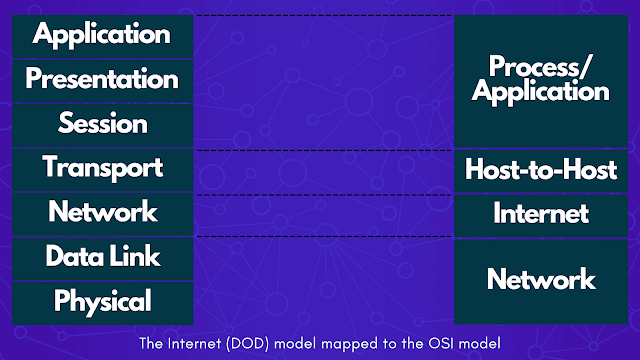 The four DOD model layers as you saw in the above image and the OSI model layers correspond as follows:
The Internet protocols do not cover the lower two layers of the OSI model. this is because the designers of TCP/IP used existing physical and data link standards, such as Ethernet and Token Ring, to make TCP/IP hardware independent. as a result, the protocols of the internet suite are widely used to connect heterogeneous systems.
As the Internet protocol suite does not include lower-layer protocols, we shall discuss the individual protocols at the middle layers. the OSI model's network and transport layer are concerned with transporting packets across the internetwork. TCP/IP and other internet protocols use three types of addresses for network addressing. These are as follows:
Each layer of the TCP/Ip protocol suite has its associated component protocols, the most important of which are as follows:

It places frames on the network. the protocols include the various local area network (LAN) architectures (such as Ethernet and Token Ring) and WAN telecommunication service technologies such as Plain Old Telephone Service (POTS), Integrated Services Digital Network (ISDN), and Asynchronous Transfer Mode (ATM).
TCP/IP is a constantly evolving protocol suite whose development is steered by such bodies as the Internet Society (ISOC), the Internet Architecture Board (IAB), and the Internet Engineering Task Force (IETF). the current version of TCP/IP is called IPv4 (Internet Protocol version 4). A new version called IPv6 is under implementation.
Add Comment
Networking
Saturday, March 20, 2021