Wide area networks (WANs) combine the continuous error detection and correction techniques included in synchronous communications with robust network problem determination and data routing to form powerful backbones that ensure high quality, reliable service for end-users. these networks allow multiple users to access a variety of host computers simultaneously through the same physical medium while separating each user's session so that no user is aware of another on the network. wide area networks also operate at speeds much higher than the 19,200 bps limit of normal voice-grade telephone lines.

WAN is used to interconnect LANs which may be at opposite sides of a country or located around the earth's globe.

What is a Wide Area Network?

WAN (Wide Area Network) is a digital communication system that interconnects different sites, computer installations, and user terminals. it may also enable LANs to communicate with each other. this type of network may be developed to operate nationwide or worldwide. the transmission media used in WANs are normally public systems such as telephone lines, microwave links, and satellite links. 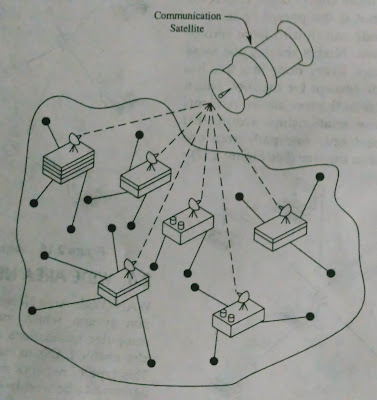 The above image shows a wide area network that a large company might use to connect regional computers. in this example, different centers such as manufacturing, distribution, and accounting are all connected to national headquarters and therefore to each other for communication purposes. most WANs are complex and serve many users and many functions as compared to LANs.

WANs are typically created using specially conditioned telephone lines, microwave communications, or satellite data transmission. some of the functions that can be performed on WANs are as follows:

It is possible to enter data for sales and transactions at the point-of-sale terminals using WANs. it is also possible to centralize this data in a computer for processing or reporting purposes.

For example supermarkets in advanced countries connected through WANs can send all sales data from their remote sale centers and the central purchase and distribution center can monitor all the dale figures on a day-to-day basis. the central distribution center can thereafter act to supply the grocery items needed in different supermarket branches based on the data collected from these branches. this helps them control all branches. this helps the control of all the branches and timely supply of all the items to different branches.

Similarly, Remote Job Entry at colleges and universities enables faculty and students to write and execute their own programs on a central computer. For example, If all IITs are connected through WANs then the research projects can be implemented easily because a program developed at one of the IITs can be used online by students of other IITs and duplication of efforts can be avoided. this not only brings efficiency but also an economy of efforts.

It is often convenient for a business to centralize regional/national information. for example, auto parts dealers can be helped in locating rare-auto parts using a centralized computer file of inventory items. WANs enable such dealers to query centralized databases.

Corporations in advanced countries often use WANs to facilitate employee communications, to save on long-distance phone calls and letter writing, to cut costs on the preparation of written documents, and to overcome the time lags involved in overseas communications. computer conferencing,  in which users communicate with each other through their computer systems is another possible function of WANs.

Many WANs configure computers in a hierarchy and are therefore called hierarchical networks. the basic idea is that local minicomputers and micro-computers cluster around regional mini and mainframe computers. this creates a reporting arrangement similar to the hierarchical relationships of an organizational chart.

The most powerful computer of a hierarchical network is usually a large mainframe computer. Often, a front-end processor is used on this mainframe site to handle input/output, data communications, and computer security tasks of the system, enabling the back-end processor to perform the required data-processing jobs.

Distributed data-processing networks place computers or terminals at local or regional sites, thereby providing computer power (e.g. access to Mainframe computer resources) to these locations. A distributed data processing system enables the sharing of many hardware and significant software resources among several users who may be located far away from each other.